On June 18, White House counsel Pat Cipollone told Congress that former presidential aide Hope Hicks was “absolutely immune” from testifying about her work for Trump at the White House. 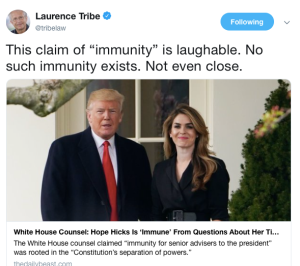 Preet Bharara, former US Attorney for the Southern District of New York, likewise ridiculed it: 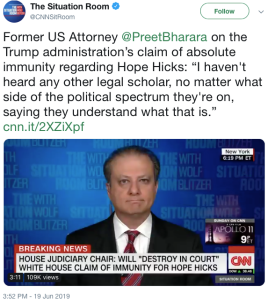 Here’s an example of what Lieu was talking about:

“Q: In the White House, where is your office located?”

Transparency and television coverage are not Trump’s friends — or Cipollone’s — or Hicks’s. Mueller’s report and the Trump-Russia Timeline reveal why Trump is blocking testimony and resisting public hearings.

On Nov. 10, 2016 — two days after the election — Russia’s Deputy Foreign Minister Sergei Ryabkov said that the Kremlin maintained contact with Trump’s “immediate entourage” throughout the campaign. The same day, Vladimir Putin’s personal spokesman, Dmitry Peskov, said Russian experts were in contact with some members of Trump’s staff during the campaign.

Hicks’ name appeared in Mueller’s report more than 180 times. At key moments in Trump’s effort to obstruct justice, she was there. Hicks has already told Mueller about them, but televised hearings would shine a public spotlight on the episodes.

MARCH 5, 2017: After Attorney General Jeff Sessions recused himself from the Russia investigation, Hicks witnessed Trump’s anger (although she’s not clear on the dates). (Vol. II, p. 51, fn. 304) When Trump learned about Mueller’s appointment on May 17, she saw his ire again — only worse. (Vol. II, p. 79)

MAY 6-7, 2017: Trump tried to cover-up his motives for firing FBI Director James Comey, but then told Russia’s foreign minister and ambassador his real reason: to remove the pressure of the Russia investigation. Hicks witnessed key moments in the episode.(Vol. II, p. 71, fn. 470)

JULY 8-9, 2017: The New York Times was breaking an explosive story: Jared Kushner, Paul Manafort, and Donald Trump Jr. had met on June 9, 2016, with Russians promising “dirt” on Hillary Clinton.” Trump personally formulated his son’s false statement to the press. Hicks was at the center of the action. (Vol. II, pp. 100-104)

JULY 19, 2017: Trump dictated a message that he wanted Corey Lewandowski to give then-Attorney General Jeff Sessions. He proposed a public statement limiting Mueller’s investigation to future elections only. Hicks typed it up for Lewandowski. (Vol. II, pp. 91-94, fn. 625)

When House Judiciary committee members directed Hicks to pages in Mueller’s report relating to those episodes, White House lawyers objected, and she refused to answer questions about them. (Tr. pp. 202-207)

The Republican National Committee is paying Hicks’ legal fees. (Tr. pp. 225-226) Since leaving the White House, she has spoken to Trump “somewhere between 5 and 10 times,” most recently in April. (Tr. p. 126)

The White House’s objection does not prevent Hicks from answering Congress’ questions. That’s her decision, but it’s now become her problem. Because if the courts reject the “congressional immunity” objection, her continued silence will lead to contempt penalties that she alone will bear — not Trump, Cipollone, or the RNC. At that point, she’ll face another decision.

This is the latest in a series of posts by Steven J. Harper on the Mueller report.