I’m reposting this from February 2020 — with three important new timeline entries at the end.:

Back in 2017, Roger Stone lied to the House Intelligence Committee. Then he threatened a witness who was going to expose him. A jury deliberated for slightly more than seven hours before convicting him on all seven counts of lying to Congress and witness tampering.

On Feb. 10, career prosecutors recommended a prison sentence of seven to nine years. As Trump tried publicly to get him a lighter one, Attorney General William Barr was working behind the scenes to help. Former Attorney General Eric Holder called Barr’s direct intervention “unprecedented, wrong and ultimately dangerous.”

Why is Trump so concerned about Roger Stone and what is Barr’s role in the growing scandal?

Aug. 6, 2015: The Trump campaign says it fired Stone, although Stone claims he quit. Either way, Stone remains a prominent Trump surrogate, maintaining regular contact with Trump and the campaign through the November 2016 election.

June 14, 2016: On the day that the DNC announces that its computer system has been hacked, Stone calls Trump.

July 18 or 19: Trump’s attorney Michael Cohen is in Trump’s office when Stone calls, according to Cohen’s later congressional testimony. Over Trump’s speakerphone, Stone tells Trump that he has just spoken by phone with WikiLeaks’ founder Julian Assange, who lives in the Ecuadorian embassy in London. Stone says to expect within a couple of days “a massive dump of emails that would damage Hillary Clinton’s campaign.” According to Cohen, Trump responds “to the effect of ‘wouldn’t that be great.’”

On or shortly after July 22, 2016: Paul Manafort directs his deputy, Rick Gates, to contact Stone for information about any additional releases and other damaging information WikiLeaks has regarding the Clinton campaign.

Late July 2016: During a ride with Trump to LaGuardia Airport, Gates and two secret service agents are in the car when Stone calls Trump on the phone. After Trump hangs up, he tells Gates that more releases of damaging information would be coming. By late summer, the Trump campaign is planning a press strategy, a communications campaign, and political messaging based on WikiLeaks’ possible release of Clinton emails.

July 31: Stone calls Trump and they speak for ten minutes.

Aug. 2:  Stone emails Manafort about the “word” coming from the “friend” in the embassy (Assange).

Aug. 3: Stone emails Manafort that he has an idea “to save Trump’s ass” and asks Manafort to call him.

Aug. 16: Stone emails Steve Bannon, who is about to be named the Trump campaign’s CEO. “Trump can still win — but time is running out,” Stone says, adding that he knows how to “win” this, but “it ain’t pretty.”

Sept. 21: On The Joe Piscopo Show, a local New York City radio program, Stone says that he spoke with Trump late the prior evening around 1:00 or 1:30 am.

Oct. 3: Stone messages Erik Prince, who is acting as an outside adviser to the Trump campaign. “Spoke to my friend in London last night,” Stone says, and a “payload” is coming.

Oct. 7: In a joint statement, the Department of Homeland Security and the Director of National Intelligence say that the US Intelligence Community is confident that the Russian government directed the hacking of both Clinton campaign and DNC emails.

Meanwhile, according to Jerome Corsi, Stone calls him on the morning on Oct. 7, claiming to have advance knowledge about the “Access Hollywood” tapes containing Trump’s vulgar comments about women. Stone says, “If you have any way to get to Assange to start dropping, tell him to start dumping.”

Shortly after WikiLeaks’s release of the emails, an associate of Steve Bannon sends a text message to Stone that reads “well done.” In subsequent conversations with senior Trump campaign officials, Stone claims credit for having correctly predicted the October 7, 2016 release, according to his later indictment.

Nov. 2: Stone says he talks to Trump about once a week, on average, according to The Guardian.

Jan. 31, 2019: During an interview with The New York Times, reporter Maggie Haberman asks Trump, “Did you ever talk to him [Stone] about WikiLeaks? Because that seemed —“

Haberman: “You never had conversations with him.”

Haberman: “Did you ever tell him to — or other people to get in touch with them?”

Dec. 10, 2019: Trump announces plans to nominate US Attorney for the District of Columbia Jesse Liu to become the Treasury Department’s undersecretary for terrorism and financial crimes. As the US attorney in DC, Liu had been managing several of special counsel Robert Mueller’s prosecutions and referrals, including those involving Mike Flynn, Roger Stone, and Rick Gates.

Jan. 30, 2020: Attorney General William Barr names Timothy Shea, one of his closest advisers, to replace Liu as interim US attorney for the District of Columbia. 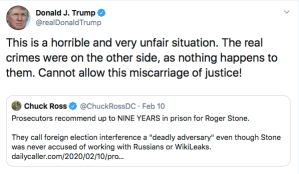 Hours later, the Justice Department says that its recommendation is “extreme” and “excessive” and that a new memorandum will outline its revised position. Shortly thereafter, the four federal attorneys who signed the original sentencing memorandum resign from the case. Jonathan Kravis — one of Stone’s prosecutors at trial — resigns from the Justice Department altogether.

As the day ends, Shea and Assistant US Attorney John Crabb Jr., who is newly assigned to the Stone case, file a revised memorandum acknowledging that the sentencing guideline factors set forth in the original memo were “perhaps technically applicable.” But the memo asserts that the previously proposed sentence of 87 to 108 months “could be considered excessive and unwarranted.”

The same day, Trump withdraws Liu’s nomination for the Treasury Department position and on Feb. 13, she resigns.

Feb. 12: Trump congratulates Barr for “taking charge” of the Stone case, “which perhaps should not even been brought”:

Feb. 13: After Barr lets Trump know some of what he plans to say, Barr tells ABC News that Trump’s tweets “make it impossible for me to do my job…”

July 10, 2020: After learning that his appeals to remain out of prison have been denied and that he surrender to the Bureau of Prisons on July 14, Roger Stone tells reporter Howard Fineman, “I had 29 or 30 conversations with Trump during the campaign period. He knows I was under enormous pressure to turn on him. It would have eased my situation considerably. But I didn’t. They wanted me to play Judas. I refused.”

America is getting a first-hand look at what Barr thinks his job is. In the Stone case, Trump’s tweets outed him. Autocrats can punish their enemies and reward their friends. With the help of savvy accomplices, the rule of law can die at their hands — before our very eyes.