As Donald Trump departed for the G-20 summit, a reporter asked him if he planned to bring up 2020 election meddling with Vladimir Putin.

“What I say to him is none of your business,” Trump retorted. 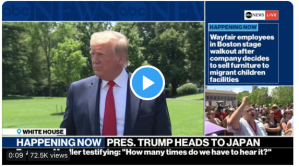 Actually, it’s every American’s business. The next day, as the two leaders sat together in Osaka, a different reporter asked Trump if he would tell Putin not to meddle in the upcoming US election.

“Of course, I will,” he replied. Trump turned to Putin, smiled, and said, “Don’t meddle in the election.” Playfully, he wagged a finger in the air and repeated the line, as if it were all a big joke. Putin chuckled. 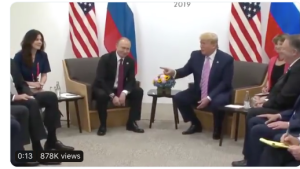 Among those who weren’t amused: Director of National Security Dan Coats, FBI Director Christopher Wray, and special counsel Robert Mueller (who may have the last laugh when he testifies on July 17).

The Trump-Russia Timeline demonstrates why no American voter should brush off Russia’s ongoing election interference — and why Trump did.

JAN. 6, 2017: The US intelligence community issues the unclassified version of its report: “We assess Russian President Vladimir Putin ordered an influence campaign in 2016 aimed at the US presidential election. Russia’s goals were to undermine public faith in the US democratic process, denigrate Secretary Clinton, and harm her electability and potential presidency. We further assess Putin and the Russian Government developed a clear preference for President-elect Trump. We have high confidence in these judgments.”

JUL. 13, 2018: Coats says that the persistent danger of Russian cyberattacks is akin to the warnings of stepped-up terror threats ahead of the Sept. 11 attacks: “The warning lights are blinking red again… Russia has been the most aggressive foreign actor. No question… These actions are persistent, they are pervasive, and they are meant to undermine America’s democracy.” 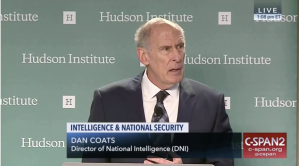 AUG. 2, 2018: Coats and Wray appear together at the White House daily press briefing and discuss Russia’s ongoing cyberattacks. “Russia attempted to interfere with the last election,” Wray says, “and continues to engage in malign influence operations to this day.” Coats adds, “We acknowledge the threat. It is real. It is continuing… In addition to that, it goes beyond the elections. It goes to Russia’s intent to undermine our democratic values, drive a wedge between our allies, and do a number of other nefarious things.”

JAN. 29-30, 2019: The US intelligence community submits its annual “Worldwide Threat Assessment” to Congress: “We assess that Russia poses a cyber espionage, influence, and attack threat to the United States and our allies. Moscow continues to be a highly capable and effective adversary, integrating cyber espionage, attack, and influence operations to achieve its political and military objectives.” [Emphasis in original] Russia then plays prominently in the section titled “ONLINE INFLUENCE OPERATIONS AND ELECTION INTERFERENCE.”

MARCH 2019: Mueller’s report is unequivocal: “[T]he investigation established that the Russian government perceived it would benefit from a Trump presidency and worked to secure that outcome, and that the Campaign expected it would benefit electorally from information stolen and released through Russian efforts….” [Vol. I, pp. 1-2] It describes Russia’s attack as “sweeping and systematic.”

MAY 29, 2019: Speaking for the first time about his investigation, Mueller emphasizes his concern about Russia: “I will close by reiterating the central allegation of our indictments, that there were multiple, systematic efforts to interfere in our election. And that allegation deserves the attention of every American.”

The same day that Trump joked with Putin, historian Jon Meacham moderated a discussion with former President Jimmy Carter at the annual Carter Center donor retreat. Since 1989, the Center has served as official observer to 107 elections in 39 countries. Meacham asked him about Russia.

“There is no doubt that the Russians did interfere in the election,” Carter replied. “And I think the interference, though not yet quantified, if fully investigated would show that Trump didn’t actually win the election in 2016. He lost the election and he was put into office because the Russians interfered on his behalf.”

Carter went on to call Trump an “illegitimate president.” 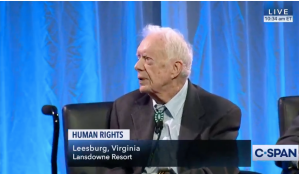 In 2016, Trump lost the popular vote by almost 3 million ballots. But he eked out an Electoral College victory based on a combined total of 77,744 votes in three states. Recent polls show him trailing virtually all of his potential 2020 Democratic rivals.

On July 17, Robert Mueller has an opportunity to describe publicly how Putin helped orchestrate Trump’s first presidential win. At the G-20 summit, Trump solicited an encore from Putin. He also invited other foreign adversaries to join the effort.

Here’s a complete list of the latest updates to the Trump-Russia Timeline at Dan Rather’s News & Guts and at Just Security:

JUNE 26, 2019: Trump and Putin To Meet In Japan; Trump Blasts Democrats on Mueller